So the 969 Festival at Wits University is underway. So named because it is 969 km from Grahamstown, the festival gives legs to some of the productions from the National Arts Festival.

Gita Pather is the curator of the 969 Festival and it opened with high art, “Vacuum”, a startlingly different contemporary art piece performed by two naked men, lit into a screen with neon lights. Most people loved the artistry and cleverness, which was undeniable in its presence. I found it a tad boring although it was only 25 minutes long. 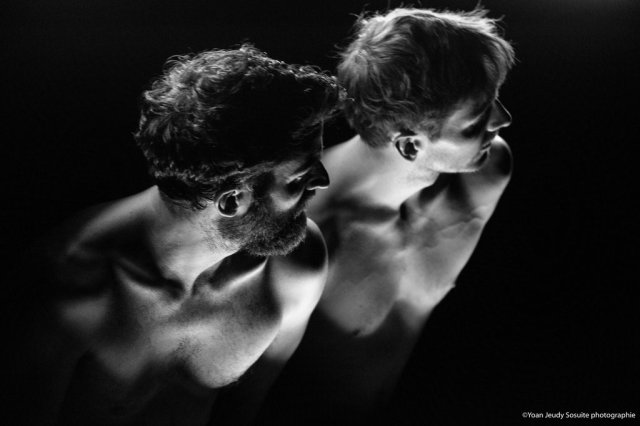 The Swiss arts journalist, Pierre Lapori, says “With his new show, Philippe Sair continues with his exploration of visual arts on stage.  Neon lights set in black crates are manipulated on stage in a way that serves to sculpt light in spectacular shades of black and grey.”

The two dancer/choreographers were Philippe Chasson and Lazer Huete (the latter in Johannesburg only).    Much of it was performed in silence, but in the credits we find “What Power Art Thou” from Henry Purcell’s King Arthur.

Altogther more in line with my personal comfort zone was the music piece after this, “Dikelo (guitar and vocals) and Bongile (flute and vocals)” brought us some easy listening with a talented quartet.  Only the vocal duo were acknowledged in the programme. This is a pity because both the bass and the percussion were superb.

The 969 Festival runs until Sunday 30 July 2017 and features some of the best works of the Grahamstown Festival.

Clergy person, theatre and music lover, avid reader, foodie. Basically, I write about what I do, where I go and things I love (or hate).
View all posts by moirads →
This entry was posted in 969 at Wits, Dance, Music, Theatre, Uncategorized. Bookmark the permalink.